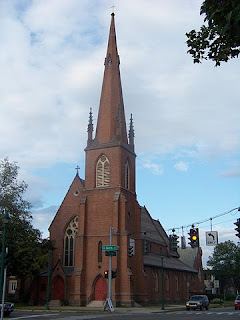 In the year 1877, the old Wisner Cemetery rested in the heart of Elmira New York, “deteriorated, and appearing as though it had no care for many years.”  The citizens of the town had determined that it was an eyesore, and were ready to repurpose the land for a community park.  The town council evaluated the situation, and prepared to remove the bodies to the town’s newer Woodlawn Cemetery.

Several descendants of my 8x-great-grandfather Peter Mathews had originally been buried in the Wisner Cemetery, mostly during the 1830’s.  It was in the years 1876 and 1877 that their bodies were removed to other cemeteries in the area, either by family members, or by the city of Elmira.

Researcher Joyce Tice gives an excellent account of the Wisner Cemetery at her Tri-Counties Genealogy and History website.  It includes a history of the land originally owned by the Wisner family, the establishment of the cemetery in 1802, and details of the removal of bodies in 1877.  It also includes a newspaper article, published in Elmira’s Daily Advertiser of 20th October 1875, with the title, and sub-titles – AMONG THE DEAD; The Story of the Tombstones; The Wisner Park Burying Ground; The Bodies of Those Buried There to Be Removed; Some Account of the Spot and the names of Those Who Therein Do Lie.

The “Tri-Counties” website also includes a list of the two hundred and seventy-seven headstones in the Wisner Cemetery that were inventoried before the removal:

Before all the headstones were removed, Ausburn Towner, a local historian, newspaperman, and writer, copied the inscriptions the best he could, and the data was published in the local newspapers.

The list, as published at the “Tri-Counties” website, also includes bracketed notes, and identifies “markers which were found on August 27, 1973, at the Woodlawn Cemetery, Elmira, New York, by Doris Boyd.”

In reviewing this list, I have identified ten persons who are descendants (or spouses of descendants) in our Mathews family, and I wanted to follow-up here with their burial story:

Robert Lawrence, Esq
Note – Robert Lawrence, husband of Catherine “Locky” Carpenter. This is a shale tombstone which contains no data. Trinity Episcopal Church records show a Lawrence as being buried 19 May 1834.
[Towner 1875; to Woodlawn by City of Elmira 1876; Boyd 1977; FindAGrave 2017 – Woodlawn, Elmira]


For more details on the people listed here, visit their pages at the Markham of Chesterfield website.

Posted by Pam Garrett at 8:49 AM No comments:

They are off! - A Horseracing Family Tradition

In 1878, Little Joe Adams Jr wrote an article titled Early Racing in Orange County [NY], and it was published in Wallace's Monthly: An Illustrated Magazine Devoted to Domesticated Animal Nature (Volume 4).  Below I draw some extracts related to the Mathews, Brooks and Waters families that are included in Adam’s entertaining and informative article.  For those who are interested in the topic, I highly recommend a complete reading.  Link at the closing of this blog post. 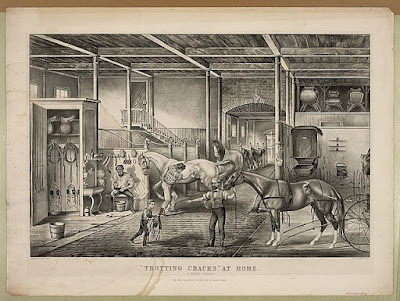 The article begins - “Horse-racing has ever been the pastime of the people of Goshen, and the major part of Orange county [New York] . . . “  Adams goes on to describe the arrival of European pioneers and their horses in New York’s Orange county.

“Very naturally the owners of these spirited animals soon began to pride themselves on the merits of their respective blooded and highmettled pets, and friendly contests of speed and bottom followed as quickly and certainly as daylight follows the hours of gloom.”

“Although New Windsor, Newburgh, Haverstraw and Orangetown were settled long before Goshen, neither had the "lay of land" suitable for racing, excepting "Matthews' Field"*—near New Windsor, now the home of Mr. Alden Goldsmith; and as Goshen had the best horses, the first matches in this county were made in this village . . . So numerous did these contests become, that it was deemed expedient, in a few years, to construct a course outside of the public highway . . . - It was located near the village, was constructed on what was afterward, and unto this day, known as Fiddler's Green . . . This was the first race-course in Orange county. Others soon followed, and at the beginning of 1800 this county boasted of at least four noted places of meeting—Summerville, Smith's Village, Golden Hill and the Old Waters Course*, which shall form the subject of this sketch.”

Adams carries on his story with several descriptions of Thomas Waters and his Old Waters Course:

“ . . . as the Waters' Course was superior in every respect, while the wealth and standing of its owner gave it a prestige none other enjoyed, his . .  course kept in a style then unknown in any of the Northern States,—it is more than simple justice to accord to the departed the honor of introducing and patronizing and propagating the best blooded stock in the county . . “

“As a part of the unpublished stallion history of Orange county, I will give you the names and pedigrees of the famous horses* and racers who have left such worthy progeny among us, and who figured conspicuously in the races of the above track encouraged by the patronage and influence of Sheriff Thomas Waters, who was, I believe, the first importer of horses in Orange county, and who loved a horse as he loved himself.”

*”Imported Clothier.—A bright bay, sixteen bands high, owned by Jonathan Brooks, of Matthews' Field (now Washingtonville). He was got by Old Clothier, who was by Matchem . . .
Badger.—A thoroughbred grey stallion, bred in Maryland, got by imp. Badger, out of the full-blooded mare, Sarah, who was got by Partner. He also was owned by Jonathan Brooks.”

“The Waters' Course was located about one and-a-half miles southwest of Goshen, on the farm of Sheriff Thomas Waters, which contained about six hundred acres. The old course was built in a very substantial manner, for those days, and at considerable expense. Like the Golden Hill Course, it followed the land—the first one-third of a mile on rolling hillocks, from ten to twenty feet high; then down across a stout stone bridge, spanning a brooklet which ran through the meadow, and then rose again to a level with the hillocks, turning then to the left, descended gradually down past the old Ash Spring , while the track across the meadow was level until it struck the home-stretch, then gradually ascended for a quarter of a mile to the stand.  The judges' stand was built by, and fastened to, the large oak tree standing on the edge of the back-track, and the start was made from the tree to the right, near the distance-pole . . . “

“Most of the old track is now obliterated; but notwithstanding the inroads of the plow of the farmer and the frosts of past winters, enough yet remains to prove to the incredulous that we of Goshen had a race-course long before these all-wise writers were born. In two or three places the old track can be distinctly traced: the turn above the stand, at the woods; the excavations on either side of the brook, and the embankment near the ash spring.”

“The races on the Waters' Course (which began in 1790) only took place in the fall of the year; differing, in this respect, from the Golden Hill Course, where meetings were regularly held every spring and fall: and in consequence of which the interest was gradually withdrawn from the former and transferred to the latter, until at length (about 1832) the Waters' Course was abandoned, fenced off, as we find it to-day, and surrendered to the husbandman.”

“The old Waters' homestead, and a remnant of the once spacious stables, yet remain, but weather-beaten and grey—mere wrecks of their former glory. The property has all passed into other hands, and today not a rood of the land is in possession of the descendants of the founder of the course. The main part of the old track is now included in the farm of Rev JR Staatz; while the old house and surroundings are the property of the Messrs Steward.”

“Mr. Thomas Waters dying, in 1834, at the age of seventy-four years, his property all passed into other hands, and the once famous stamping-ground of Orange county sportsmen is to-day almost forgotten by even those who once participated in its enchanting sports.”


For more details on Thomas Waters, Vincent Mathews, and Jonathan Brooks visit their individual pages at the Markham of Chesterfield website.


Photo Credit:
“Trotting Cracks at Home, a Model Stable”; Thomas Worth sketch for Currier and Ives, 1868; Library of Congress Collection; no restrictions.
Posted by Pam Garrett at 11:52 AM No comments: 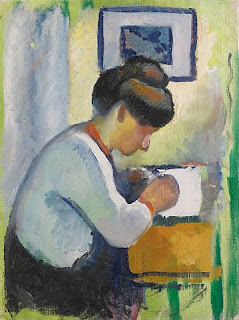 Much to my disappointment, my Markham of Chesterfield blog has stood idle for more than two years.  But, for me, that is how life “unfolds” at times.  Over the past few months I have returned to work on the Mathews branch of my family, and I am ready to post up a few more stories on this intriguing group.  My own connection to the Mathews family is through Catherine (Catalina) Mathews, who married John Markham about 1740, probably in Orange county New York.  Her parentage remains in question, but it appears most likely that she is the oldest daughter of Vincent Mathews and Catalina Abeel, of Mathewsfield in Orange county New York.

In 2015-2016 I included several stories on this blog related to the likely ancestors of Catherine Mathews – Captain Peter Mathews, New York Governor Benjamin Fletcher, and William Fletcher and Henry Vincent of London.  More recently I have been looking at Catherine Mathews’ likely aunts, uncles, siblings, and cousins.  There are some very interesting characters in the group, and I am looking forward to sharing a few of their stories.

For more details on Catherine Mathews visit her individual pages at the Markham of Chesterfield website.


About the photo:  Woman Writing by August Macke, 1910. Public Domain.
Posted by Pam Garrett at 1:50 PM No comments: